At the same time, we ranked in 102nd place on Canada’s Top Growing Companies (which ranks growth on a 3-year span)

Ranking Canada’s Fastest-Growing Companies by five-year revenue growth, the Growth 500—formerly known as the PROFIT 500—profiles the country’s most successful entrepreneurial businesses. “In recent years, we have focused our efforts mainly on developing our offer to Canadian brands and broadcasters in content strategy, production and deployment. Efforts that have paid off,” says Ian Quenneville, co-president of the company. “The Canadian television and branded content landscape has evolved enormously over the same period, allowing us to grow both our offer as a content agency and as a television producer. »

Toast was among the first content agencies in Canada to approach marketers and brands to help them structure their audience building efforts and engagement metrics. The increase in content marketing needs among them has directly contributed to the company’s growth.

In addition, the creation of a television production division has created various synergies between content produced for Canadian broadcasters and that of brands working with Toast. Our recent television productions are perfect examples of this ability to develop and create variety and documentary series that take advantage of the organization’s structure.

“This growth has also allowed us to build a great multidisciplinary team. At Toast, we are a core of 30 content experts, but in reality we have a team of 400, and every year we bring in several hundred experts and collaborators to improve the strategy, production and deployment teams of the projects in which we participate,” says Alexandre Gravel, co-president of Toast Studio. “It is this formula that allows our clients to benefit from the strength of our team and our network on all the agency’s and production company’s projects.”

And the company’s growth will not stop there. Its development plan combines organic as well as strategic growth, with a short-term focus on Toronto, where partnerships have already been established.

“The companies on the 2019 Growth 500 are truly remarkable. Demonstrating foresight, innovation and smart management, their stories serve as a primer for how to build a successful entrepreneurial business today,” says Beth Fraser, Growth 500 program manager. “As we celebrate over 30 years of the Canada’s Fastest-Growing Companies program, it’s encouraging to see that entrepreneurship is healthier than ever in this country.”

Launched in 2019, the Canada’s Top Growing Companies ranking program aims to celebrate entrepreneurial achievement in Canada by identifying and amplifying the success of growth-minded, independent businesses in Canada. It is a voluntary program; companies had to complete an in-depth application process in order to qualify. In total, 400 companies made the ranking this year.

“We created the Canada’s Top Growing Companies program because we believe there is much Report on Business readers can learn from the successes of the country’s best entrepreneurs,” says Derek DeCloet, Editor of Report on Business and Executive Editor at The Globe and Mail. “We’re excited to be telling their stories.”

“The 400 companies on the inaugural Report on Business ranking of Canada’s Top Growing Companies ranking demonstrate ambition, innovation and tremendous business acumen,” says Phillip Crawley, Publisher and CEO of The Globe and Mail. “Their contributions to the economy help to make Canada a better place, and warrant commendation.” 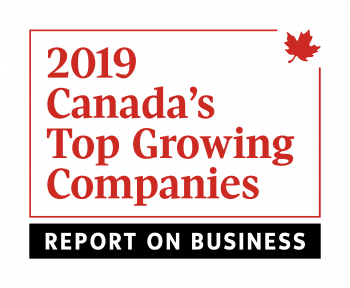